Behind-the-scenes look at the development of kojic acid 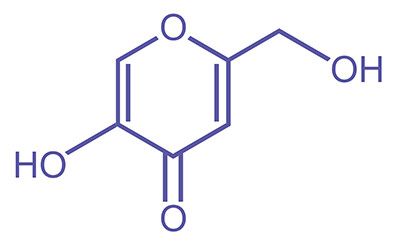 Kojic acid was discovered in 1907. Research on kojic acid later intensified after it was noticed that the hands of brewers and distillers who worked with koji or rice malt were distinctively white and smooth. In 1988, kojic acid was approved by the Ministry of Health, Labour and Welfare of Japan as an active whitening ingredient.

Kojic acid has excellent whitening effects. However, it was tremendously difficult to use it in cosmetic products due to the need to use a highly specialized mixing technique to maintain its effectiveness. Every time I felt discouraged, I raised my spirits by reminding myself of my responsibility, as a researcher, to get this on the market. After having overcome many obstacles, we finally succeeded in launching “KOSÉ Whitening Cream XX,” a cosmetic product containing kojic acid, in 1990. Thanks to support of long-term users for many years since its launch, the kojic acid formulation has been constantly improved. 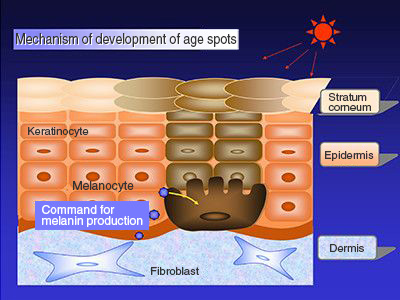 Mechanism of development of age spots

Age-related spots are known in dermatology as a pigmentation disorder. There are different types of pigmentation disorders, among which chloasma, senile pigment freckles, and ephelides tend to be worsened particularly by exposure to UV radiation. They are formed when cells in the skin called melanocytes produce excessive amounts of a pigment called melanin. Kojic acid inhibits excessive melanin production and exhibits whitening effects.

When an enzyme called tyrosinase acts on tyrosine, a type of amino acid, tyrosine is synthesized into melanin, a black pigment. Tyrosinase is activated when copper ions attach to it. With its chelating effects, kojic acid removes copper ions from tyrosinase, inhibiting melanin production and exhibiting whitening effects.